At around 7 years of age, your child will need to see his or her orthodontist for his/her first orthodontic evaluation 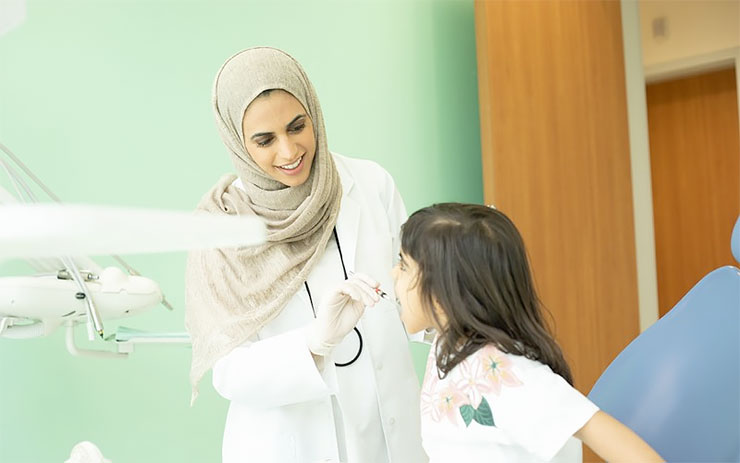 Dr. Fawzi Alqatami
Diplomate of the American Board of Orthodontics
Ministry of Health, Kuwait

At around 7 years of age, your child will need to see his or her orthodontist for his/her first orthodontic evaluation. This is a very important milestone in your child’s treatment. The reason is that at approximately this age, your child’s permanent teeth will start to erupt marking a transformation from the primary (milk) teeth phase to the mixed dentition phase. There will be a mix of adult and baby teeth together at this age. The first teeth that will erupt are the lower permanent incisors followed by their upper counterpart.

Depending on the severity of your child’s cleft, some problems might arise during the mixed dentition phase; as some teeth might be missing in the cleft site or there might be some extra ones! In addition, the front teeth might be coming in a rotated or strange position. This would necessitate an interceptive orthodontic treatment; in order to align these rotated teeth. In case there is no space for them to erupt, the Orthodontist will design a specific plan to make room for these teeth. Usually, interceptive treatment in this context would last for about 12 months.

In addition to the above, your child’s orthodontist will assess the amount of facial growth that has occurred so far. He can get an initial idea if the upper jaw (maxilla) and lower jaw (mandible) are growing in harmony or not. In a situation where the palate has a cleft which was repaired by the surgeon at 12 months of age, your child would have a scar in the palate after the surgery! This scar would act as a rubber band holding back the maxilla from growing in front to back direction and also widthwise. If this is present, there might be an intervention that your child’s orthodontist might be able to do. The first step would be to correct the width of the upper jaw (expansion) with a special custom-made appliance called an Expander. The idea is to place an appliance around your child’s teeth with a jack screw in the middle, and the parent will be activating  the screw through a special key on a daily basis with specific instructions on how many turns a day and for how long. Once the desired expansion is achieved, the Orthodontist will instruct you to stop the activation and lock the appliance.

In case the facial deformity regarding the lack of growth of the upper jaw is evident at this phase, there might be an optional intervention to solve this problem. If the expansion is needed, and after it has been completed, another type of intervention is possible to correct the position of the upper jaw. There is an appliance called “Face Mask”. The idea behind it is to use an external device to help us advance your child’s maxilla through the use of an external appliance (outside the mouth) and an internal appliance (inside the mouth) along with elastics. The idea for the elastics is to produce a force level high enough to move the upper jaw forward and catch up with the lower jaw. In order to produce an orthopedic effect (to move the upper jaw), the appliance must be worn for at least 18 hours a day; so it will take a lot of commitment from both sides in order to achieve a desirable effect.

This face mask therapy could last anywhere from 6 months to 1 year. Due to the nature of the scar tissue, the Orthodontist might have to repeat this cycle multiple times between the ages of 7 to 10 years old. These cycles must have a time limit; in order to avoid losing your child’s commitment in this regard.

Taking care of your braces